Skip to content
May 28, 2013
Alfalak Electronic Equipment & Supplies Co., a leading provider of technology-based end-to-end solutions in the Middle East, has recently concluded a series of presentations at various career fairs as part of the company’s ongoing efforts to create more opportunities for career growth and development among Saudi nationals. Alfalak attended the Career Day programs at the Prince Mohammed Program for Youth Development (PMPYD), at the King Fahd University of Petroleum and Minerals (KFUPM), and at the Institute of Public Administration.
Prince Saud bin Nayef served as the guest of honour during the Career Day at the Institute of Public Administration, which drew a large number of participants. Alfalak alone received more than 1,200 CVs during the event. Alfalak also received a certificate of recognition from the Institute of Public Administration for its active participation during the event and its leadership in promoting the Saudization initiative. 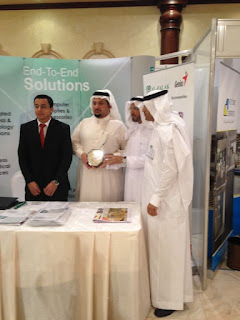 Ahmad Ashadawi, President and CEO of Alfalak, said: “We have always been committed to support the government’s Saudization programs by reaching out and creating career development opportunities for citizens from different sectors of the society. Alfalak’s ongoing career development and Saudization programs have been highly successful as we are able to develop a highly competent workforce, while creating a positive impact on the national economy by helping fill the employment gap in KSA. We had a highly productive participation during the Career Day programs at the PMPYD, KFUPM, and at the Institute of Public Administration. This strongly reflects the value of our Career Development and Training and Development strategies, which focus primarily on empowering Saudi nationals to become more productive members of the society.”
Alfalak Electronic Equipment & Supplies Co., which draws on 32 years of expertise in the Middle East’s information and communications technology services market, has been classified by the government classification of contractors to bid for government projects in the following categories: general contracting, information technology, electronic security systems and telecommunications.